Following last month’s Newsletter reported waiver trifecta: UC report release; disallowance; and request for Texas to resubmit its 1115 waiver; this past month has been relatively calm. We do have some answers to some of the trifecta issues while HHSC is in preparation mode in advance of face to face waiver negotiation meetings with CMS later this month.

Disallowance.  CMS has indicated that the disallowance is a “test case.” CMS and HHSC discussed sending a test case for review months ago but HHSC had no heads up before receiving the disallowance notice. Even though it’s a test case, it’s an actual disallowance: unless overturned upon review or appeal, CMS will collect the disallowed funds from Texas.  HHSC also indicated that it will seek a Secretarial review before pursuing an appeal through the federal HHS Departmental Appeals Board (DAB). HHSC also said at this point, if a review or appeal is not successful, HHSC can’t say how or from whom they’d seek repayment on the disallowance.  HHSC had an October 7th association call on the disallowance to provide an update, seek support and obtain input. Because the outcome of the current disallowance could affect UC and DSRIP payments retroactively, HHSC sought input on whether the state should or should not continue making UC/DSRIP payments. For more information see THIS #1.

Another Application for Texas Waiver Renewal? HHSC will not be submitting another waiver application to CMS. CMS had requested, upon the advice of its legal team, that HHSC submit another waiver renewal application.  The request reportedly caught HHSC, as well as CMS’ Deputy Administrator and Director for the Center for Medicaid and CHIP Services (CMCS) Vikki Wachino and Waiver Demonstrations Director Eliot Fishman by surprise.  In any event, HHSC notified CMS last week that it does not intend to submit another renewal application (see HHSC letter to CMS’ Vikki Wachino); that its application will remain unchanged; and that it is seeking a face to face meeting later this month to move into substantive waiver negotiations with CMS. Executive Commissioner Smith hoped to have negotiations completed in December. HHSC wants to be prepared to bring to the legislature what CMS might require of Texas for a waiver renewal.  For more on the waiver renewal see THIS #2

Commissioner Smith reviewed the state’s plan for negotiating the waiver renewal (see renewal above) and indicated that there is nothing substantive in the report with which HHSC will disagree. Pam McDonald, the Director of the Rate Analysis Division, noted that HMA accessed a huge amount of Medicaid data and did a great job analyzing it.  We acknowledged HHSC’s role in creating and managing the UC/DSH data set, which provided a great data set for the Texas study, and that wasn’t available in other states. Florida, for example, that had to depend on the less reliable Medicare S-10 report. The graphic below (JESSICA’s) highlights data from the HMA study. It shows the estimated total amount of hospital uncompensated care in Texas for 2017 ($8.2 billion); the reported amount of uncompensated care related to hospital care for the uninsured ($3.7 billion); the current waiver UC funding ($3.1 billion) and the amount of UC remaining if CMS were to provide a reduction at the level they did in Florida, of 40% ($1.9 billion). 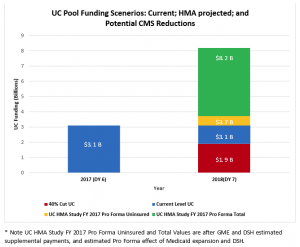 HMA estimates $8.2B in UC, $3.7B of which is for Uninsured Care. The remainder is for Medicaid shortfall. That compares to $3.1B in UC today and, for perspective, a 40% UC cut if CMS does what it did in Florida.

The $8.2 billion dollars of estimated UC from the report assumes a Medicaid expansion is in place, and considers Medicaid DSH payments made to offset hospital uncompensated care. Other key points from the report and discussion:

Payments as a % of Cost with and without Supplemental Payments by Hospital Type: HMA 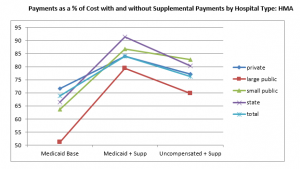 HHSC held an all-association phone call October 7th with the Executive Commissioner and staff on the waiver disallowance.

HHSC wanted to: provide an update to stakeholders and seek support and stakeholder input to CMS regarding the importance of the current financing system in Texas.

HHSC released through its stakeholder distribution list the HHSC Oct. 6, 2016 letter to CMS. The letter notifies CMS that the Commission’s original waiver renewal submission sent September 29, 2015 stands as the state’s request and the application remains unchanged. The Commissioner also asked CMS to schedule a face to face meeting in October to negotiate on a waiver renewal; and asked for CMS’ analysis of the HMA Uncompensated Care study prior to the meeting.

You will remember that HHSC was told in a call by CMS staff that HHSC would need to resubmit the waiver application.  HHSC subsequently noted that this request was news to CMS leadership including Vicki Wachino and Eliot Fishman at CMS. The request by legal staff at CMS was made to ensure that CMS was following its own requirements. CMS leadership was reviewing this request.

Waiver Budget Neutrality: What does it mean for new waiver initiatives?